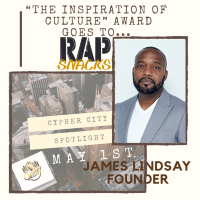 Philadelphia native, James Lindsay, graduated from Cheyney University with a Bachelor of Science degree in Marketing. He initially developed his marketing skills while serving as a manager in the consumer products industry for Johnson Products, an ethnic hair care company, and Warner-Lambert. These experiences, and his desire to own a business, empowered him to start Rap Snacks, Inc in 1994. The initial success of Rap Snacks helped solidify a co-marketing agreement with Universal Records. The deal consisted of advertising Universal’s Artists on all Rap Snacks bags. Eventually the company grew into a five million dollar business selling mostly twenty-five cent bags of chips.

In 2001 Mr. Lindsay decided to expand his product line by purchasing a snack foods line called “Mr. G” snack foods. Mr. G was a locally owned Philly brand that was best know for its hot and barbeque cheddar flavored chips.

In 2007, Mr. Lindsay launched Soulful Foods, Inc. The mission of the company is to provide consumers with a great cultural experience through unique products and seasonings, and to partner with other ethnic brands in order to expand their product reach in the marketplace.

The first product launched under Soulful Foods, Inc was a venture between Mr. Lindsay and Sylvia Woods, the “Queen of Soul Food”. They came together to develop a nationally recognized brand of snack foods called “Sylvia’s”.

Mr. Lindsay has been in the consumer marketing industry over 17 years. His unique marketing concepts and flavor profiles have differentiated his products from other snack items on the shelf and helped him build the company’s loyal consumer base.

In 2010, Mr. Lindsay continued to be an big influence in the music marketing industry; guiding platinum selling recording artist, Meek Mill by connecting his brand with corporate America and securing brand deals with companies such as, PUMA, Monster Energy Drink, and Ciroc. As well as partnering with Monster Headphones to help create the Monster’s 24k Headphones. Mr. Lindsay also assisted Meek Mill in growing PUMA’s business an additional 200 million over a five year period. He’s also worked with Master P and his family.

Over the past 12 years he has been featured on “CBS Morning Show”, ABC’s “The Jimmy Kimmel Show”, BET, Fox News, People Magazine, The “Tavis Smiley” Show, Black Enterprise, Forbes, and Entrepreneur Magazine. He was also recognized by Business Philadelphia Magazine as “Top 100 People to Watch”