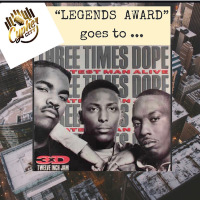 Three Times Dope was a hip hop/rap group from Philadelphia, Pennsylvania consisting of EST (Robert Waller), Chuck Nice (Walter Griggs) and Woody Wood (Duerwood Beale). 3xD, as they were called for short, were a part of the Hilltop Hustlers Crew (which also included Steady B, Cool C, Da Youngsta's, Mentally Gifted, and others). At first, they recorded under the name 3-D.

Their debut LP, Original Stylin' was well-received, peaking at #122 on the Billboard 200 Album Chart and the group became well known for the terminology they created, such as “Acknickulous” and “The Giddy Up”.

EST would eventually go on to become an award-winning songwriter for top-tier acts, most notably a Grammy nomination in 2005 for Destiny's Child's "Cater 2 U".